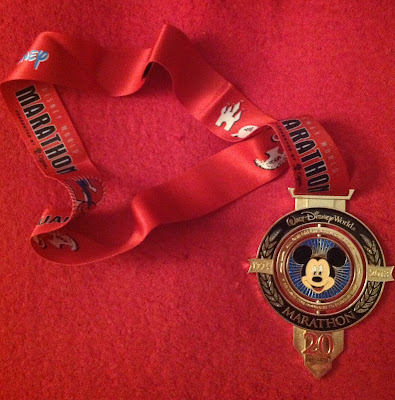 If you are wondering why the name of the marathon has been changed to Dizzy instead of Disney, it's because my cell phone auto correct, likes Dizzy better, so i left it as Dizzy.

No lie, that 26.2 HURT! Blame it on the heat. But guess what, it was all worth the last 3 miles of ankle pain (revenge of the flip flops) and sweating like a wildebeest from mile 2 through the finish. Best part is that I BQ’d (qualified for Boston) with 43 seconds to spare according to the tracking emails or 44 seconds if you check the official Disney online results. Whatevz, a BQ is a BQ and I got the exact finishing time that I trained for. I even had a pace band printed out weeks in advance for 3:44:00 and I already had it planned as of last year, that I wasn’t going to work any harder than I needed to. After coming off an Ironman less than 2.5 months ago, I had no desire to push harder than I needed to and I for sure didn’t want an injury (ankle pain from revenge of the flip flops was threatening). So I got exactly what I trained for. Fair enough I’d say. You want to know what the best decision of the day was? I believe this was the deal maker (not breaker). I stopped to pee at mile 6 (since there was no line for the port-o-potty)and decided that taking the time to wipe was ridiculous and a waste of time. If you figure how long it would have taken to unroll the toilet paper, wipe, etc …that could have cost me the BQ right there. Smart, huh?? There were several times during the 26.2 miles that things kinda hurt …left hip around mile 11 and the  inside of right ankle intermittently from start to finish but nothing that I thought warranted stopping and walking. I, personally, DO NOT believe in walking a marathon unless I am near death, which was the case last year at the Melbourne Music Marathon and that is no exaggeration. No walking in a marathon is MY rule. I cruised in the last 3 miles because frankly, I did not want to kill myself anymore than I needed to, so I did the math in my head at mile 23 and figured all I needed to do was maintain a 10 minute pace at worst to make it in under the deadline of 3:45:00. I can run 10 minute miles in my sleep, so no prob. Did I have fun? No, I did not. I wasn't there to have fun. I was there on business, not pleasure and for one sole purpose and that was to leave with a ticket to Boston in my pocket. I spoke to no one the entire time. It was as if I had tunnel vision the entire race.  Just me, my music, and my thoughts. Mission accomplished. That’s my race report for Disney!

Now for the fun stuff. I may not have had fun at the marathon but I did have fun the day before. I drove from Tampa to the mouse house on Saturday, the day before the race. Karen met me at the expo and I told her that I was just going to pick up my number, race packet and get the hell out. I had no desire to buy any race merchandise. Been there done that ...everything is overpriced. Plus, I know where they sell a lot of the race merchandise later at a discounted price if I really saw something I wanted. Ya'll know I'm not paying full price for anything!

After leaving the expo, I followed Karen to our 5 star hotel. The one without Wi-Fi ...pfft! And the one with a carnival set up out front. It was actually a nice hotel and Karen totally made up for the no wi-fi and carnival noise by making sure I had a video game arcade to keep me entertained before we had to go to bed at 6:45pm, which somehow turned into 8 or 8:30pm because Karen likes to chit-chat A LOT before going to sleep. I kid, I kid. It takes two and we were having quite the laugh fest. Time does fly when you're having fun. Before we knew it, the rooster was crowing at us at 2:30am to wake the hell up. We said a few choice words and something how we're NEVER doing this marathon again because this waking up at 2:30 is BS! See you again in 10 years for the 30th anniversary Karen! 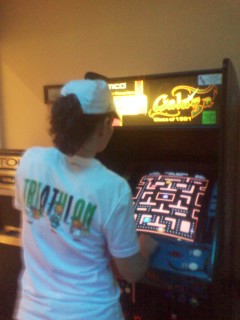 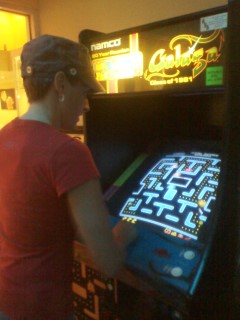 KC the pool shark in action!

No more marathons for me until April 2014. Actually, I mean no stand alone marathons, since I do have to do one in November at Ironman Florida but somehow, that doesn't count because it doesn't hurt nearly as bad. Go figure! I know, it makes no sense but to those who have done an Ironman and a stand alone marathon, you know what I mean, right?

Next up, a very hilly 100 mile grand fondo in Dade City, Florida and then less than a week later, the HITS 70.3 in Ocala, Florida on March 23rd. Now those should be FUN!

Much love and peace out!