a lot of you emailed me and texted me last month while i was on my disappearing act tour and i'd like to say thank you for checking in with me. that was very kind of you and much appreciated. so you wanna know what happened? i'm not even sure where to begin really so i'm going to break it down into the good, the bad, the sad and the ugly but not necessarily in that order, ok?

THE GOOD:
i decided somewhere back in late december, early january that my running was going so well that why waste it, so i found a marathon to do. one that was close to home, fairly flat, and no fuss (meaning, not a huge crowded mess of runners like Disney for example). my goal? qualify for boston, which relatively speaking, should have been in the bag easily. i only needed to run a 3:45 or better. i can't remember the last time i ran a marathon over that time, so you can see why i was so sure of myself. i wasn't being cocky at all. all of my long runs were spot on and i was feeling like a million bucks.

THE BAD:
friday, feb 2nd, 2 days before marathon day, i swam that morning before work and felt perfectly fine. i got to work at my normal time and noticed throughout the day that i had an annoying, dry cough. nothing that was alarming to me at all. i had no cold like symptoms and i never felt out of sorts. next day, saturday, i did an easy run and went to swim. again with no major issues except for that same annoying, dry cough. on my way home, i stopped at walmart and bought some thera-flu and zicam just in case i needed it.

we left for melbourne around 2 in the afternoon on saturday so i could get to the expo to pick up my goodie bag, race shirt and bib before they closed. on the drive there, i noticed that i started getting chills. now, if you know me, you will know i am ALWAYS hot. i like my environment cold. this was not the case on this 83* day. i was freezing and i couldn't stop shaking. luckily we had 2 towels in the J-man's truck so i covered my legs and upper body with them and felt much better. i still didn't feel bad at all, just had chills.

i went to bed around 9 that night, again, still not feeling crappy at all. i still had chills all night and woke up a few times, drenched in sweat. no big deal i tell myself.

THE UGLY:
i wake up on race day and do my usual routine. shower, eat, drink a tiny bit of coffee, get dressed, etc ...
the J-man asked how i felt as i was starting to cough a little more than the last few days. i told him the truth ...i felt fine and that i was going to go out there, run the marathon and get my boston qualifying time. the drive to the race start was uneventful. as i was waiting for the race to start, the J-man came up to me and looked me straight in the eyes and asked me if i felt okay enough to do the race. i looked him straight in the eyes and said, "i've got this." as in, i've got this BQ, no prob, kiss-kiss, see ya at the finishline.

bang! the race starts right on time. i tell myself to not get all caught up in the 1/2 marathoners pace and to hold my "easy" pace. first five miles was like i was on a treadmill. every mile split was an 8:20. i thought there was something wrong with my garmin. rut-roh, mile six and i see an 8:45 and now i feel really, really sick. what the hell? by mile 8, i pulled out the white flag and surrendered. by surrendered, i mean, i knew the marathon was out of the question. i told myself to just finish it up with the half marathon and call it a day. yes, i was pissed off. all of this hard work and nothing to show for it. the last 5.2 miles were hell. i really didn't think i was going to even make it back to finish the half. i did something i never do in a race. i walked (gasp!). i had no choice at this point but to go into survival mode. i saw the J-man at mile 11 as he was about to take my picture. i yelled NO PICTURES! i also told him that my day was over and to meet me back at the finish. by the way, i've yet to check the camera to see if he took any pictures that day. i would rather just forget the entire weekend. there was no way i was going to leave without the cool spinning medal, even if it was just the half marathon. thankfully, the medal for the half and full were almost identical except for the ribbon. i ended up finishing in 1:57:35 ...pitiful! it made me even more sick to see that time. ok, let me clarify, finishing in just under 2 hours isn't horrible, but for me, based on my normal race pace in a half, it's horrible. 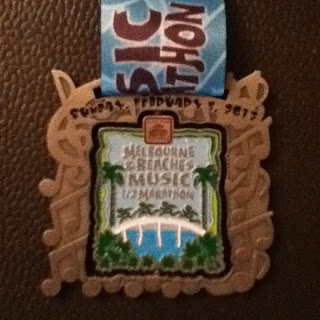 THE REALLY BAD AND UGLY:
as soon as i was done, i grabbed a water, declined the official finishers picture with my medal, and immediately found a bench to sit down on. i had nothing left. i was almost dead. i drank some water, coughed my head off, then gathered myself up to head back to the car. we went back to the hotel so i could shower, then we headed home. i slept all the way home (2 hours). as soon as we got home, i grabbed my bags out of the car, threw them in the office, changed into sleeping cloths and went straight to bed and i slept like Snow White ...but only for 2.5 weeks. LOL!

﻿actually, what ended up happening was the first week, the doctor thought i had pneumonia and was treating me for that with 3 different meds and a shot in the butt cheek. after a week of that, i was getting worse, not better, so back to the doctor. this time i was scared. i thought for sure i would get there and they would send me straight to the hospital. thankfully, they didn't. the doctor did however, change his diagnosis to the bubonic plague severe bronchitis and the flu and gave me 2 more meds and yet another shot in my tushy. let me just say that i have never in my life been so sick. not EVER! what a freakin' nightmare.

THE SAD:
i had to skip running the inaugural st. pete rock and roll half marathon, which meant, i didn't get to drop it down low with Flo Rida after the race. boo-hiss on that. thankfully, i did get to run the gasparilla half marathon but i was nowhere near race shape thanks to the ebola virus. yes, i was a bit sad and frustrated to not be able to open up all cylinders this year but i'm okay with it now. the medal is to die for too. i would have crawled the entire way for that medal too. 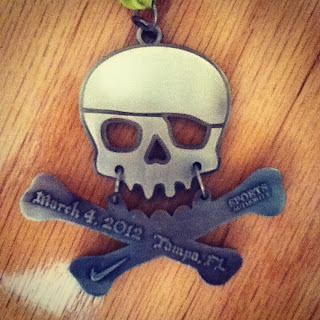 THE GOOD:
all in all, i feel so much better now. i am not 100% YET but getting closer everyday. i will admit that i was extremely frustrated for the last few weeks because i felt like my progress was soooo slow, my breathing was like a 3 pack a day smoker and Lord knows i am not the most patient person. but now i look at my almost month long hiatus as a much needed vacation for my mind, body and soul. albeit, a vacation that was forced upon me but one that obviously was much needed. that's how i chose to look at it.

i officially began my hard core training for Florida 70.3 so watch out world, i'm on my way back.

just wanted to let you know ... 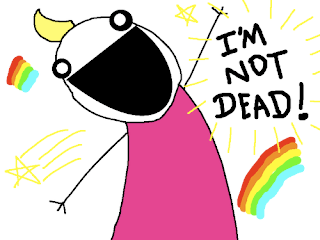 i promise to update my blog this week. i had a february straight out of hell. that is all.
as a side note, i'm not feeling the wordpress thing so much yet so rather than not blog at all,  i am going to stay here on blogger until i have the time to really understand wordpress a little better. in other words, wordpress is frustrating me and i'm finding myself avoiding blogging all together. thanks for reading.