Live for today and Love like it was your last 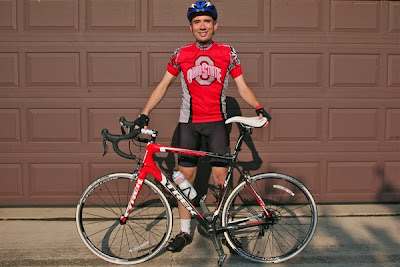 
Last night when I got home from work, I was chilling on the sofa with my ipad and started scrolling down my Facebook feed when all of a sudden I read a post that someone left on another friend's wall and my heart sank. I immediately went over to that person's wall and my worst fear was confirmed. Dale had been hit by a car that morning, while doing his morning ride, something he was so passionate about. He died at the scene from his injuries. I couldn't help but think about his beautiful wife and 3 children. My heart hurt, I felt like throwing up and I'm still trying to wrap my head around it.

What scares me the most is that Dale is us. We are all Dale's. We ride out bikes on the road and we run on the road as part of our daily routines, whether for training or just shear enjoyment. That could have been any one of us out there yesterday. I wish I could say that I live everyday like it was my last but I am guilty as charged of not doing that as much as I should. It's these tragedies that remind me that I do take life for granted, then something like this happens and I see it as a wake up call. Unfortunately, these reminders have been happening more often as of late.

I met Dale through a website called Dailymile where people log their workouts. You can think of it as a the Facebook of training logs. I have met others on there in real life and some I haven't but nonetheless, you form a connection, a bond, that we're all in this together, training everyday to become better at whatever it is we do, and we all encourage each other along the way. Dale was known for his crazy workout posts where he described his AWESOME sweat FEST in his tight SPANDEX, after an 11 hour day in the pharmacy. Basically, he worked a ton of hours, had three kids, a wife, and still found time to squeeze in a lot of biking miles. And he loved every bit of it. He was also the first to comment on your workout post too. I watched this guy go from a clunker hybrid bike to a Trek Madone and his metamorphoses into a cyclist was a thing of beauty. I thought I rode a lot but this guy had me beat and that's a huge deal.

Dale and I were also friends on Facebook. His Facebook page and posts never mentioned his cycling. What he posted about really reflected on the kind of person he was. He posted about his daughter/daddy rides with his oldest child, he posted about date night at the Brown Derby with his wife, and he quoted scripture from the bible. I used to roll my eyes when I would hear others talk about someone who had just passed away and how they always say, "so and so was such a great person, never said anything bad or did anything bad to anyone." In my head I was saying, "yeah, right." But guess what, Dale was that guy. Never, ever did he post one negative thing on DailyMile or Facebook. Not one ugly, mean thing. It was always the most positive words. I would like to be more like Dale. I never met him but I'm saddened by the loss of this fellow cyclist. The world is not the same without him. Rest in peace, Dale. May God look over you, your children, your wife, and your family and comfort them always.

Which leads me to this. Dale's goal on DailyMile was ...


Cycle every single day in 2013. Stay HEALTHY and FIT through cycling and enjoy living life to the  FULLEST!


In honor of Dale, beginning today, I will cycle every single day in 2013, even if only 1 mile. Who wants to join me?

If you'd like to read the newspaper article about Dale, you can find it HERE.

Much love and peace out!